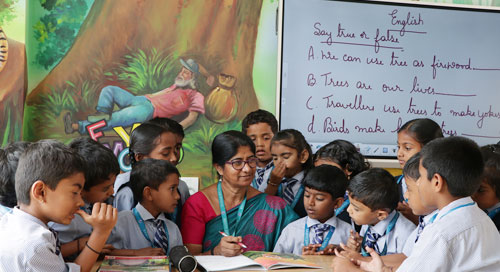 INTRODUCTION
In the Academic Year 2019 – 2020 totally 6 Parents’ Teachers’ Association Meetings were held. All our PTA Meetings will begin at the sharp scheduled time. All the parents’ teachers’ meetings will begin with a prayer song or silent prayer, welcome address, that particular day’s agenda, Principal’s Instructions and Discussions with the parents and the meeting will conclude with vote of thanks. Parents’ Orientation Programmes will also be held during PTA meetings. Unit Test Report Card and Test papers will be disturbed to the PTA meeting and parents will be asked to sign the Report card. The programmes will be anchored by our grade 6 students. At the end of the meeting Parents will sign in the PTA Meeting Minutes Register.

The first PTA Meeting was held on 27.07.2019. In that first meeting Election for the Posts of PTA President, Vice president and Executive Members were held. There was a parent orientation programme on Positive parenting of the new generation conducted by Fr. Joseph Panamphzha CMI. Then a general instructions about our new school, its aim, curriculum etc were given by our Father Principal. The meeting was concluded with a discussion with parents.

The third meeting was held on 23.11.2019. It was a small meeting were the monthly prizes for discipline, spoken English, cleanliness, top marks and 100% attendance were distributed. At the end November months unit test papers and report cards were distributed.

The fifth meeting was held on 07.03.2020. That session was in Kannada language. It was conducted by Mr. Sridhar, Kannada lecturer. The topic was Being friendly with Children.

The last meeting was held on 11.03.2020. It was an emergency meeting scheduled one day before the meeting day due to Corona Virus out break spread in Karnataka and the cancellation of the Annual Examination by the Government. Only grade 6 parents were called for the meeting.

Totally 3 Parents’ Orientation Programmes were held in this academic year.

The third Orientation Meeting was held on 07.03.2020. The topic was Being friendly with Children. The session was led by Mr. Sridhar , Kristu Jayanti College.